Hamilton won from pole, leading all but one lap, in a race that finished behind the safety car. It was his 11th win of the season, fourth in Bahrain and 95th of his career. Bottas started second but lost four places on the opening lap before the red flags for Grosjean's crash. The Finn then suffered a front-right puncture at the race restart. He collected another puncture at the end as well.

Albon inherited third place when Perez suffered an electrical problem in the power unit, pulling over with flames coming out of the rear of the car with three laps to go. Verstappen was far behind Hamilton until the final safety car, but set the fastest lap.

A good points haul for both lifted McLaren back up to third place. Norris started ninth, Sainz 15th in an important race for the team whose main shareholder is Bahrain's sovereign wealth fund Mumtalakat.

Perez was third until his power unit failed three laps from the end. Stroll retired after his car flipped upside down following contact with AlphaTauri's Kvyat, who was given a 10-second penalty.

Renault are now 10 points behind Racing Point but the gap to McLaren has widened to 27. Ricciardo might have been sixth but for the safety car.

Leclerc was seventh at the re-start but then struggled for pace. He had started on pole last year, finishing third. Vettel had to take action to avoid Stroll's car and lost places. The German also took issue with Leclerc over the radio when the Monegasque forced his way past at the re-start.

Gasly reaped the rewards of a one-stop strategy, making the tyres last. Kvyat was penalised for the Stroll collision.

Raikkonen damaged his car's floor at the re-start. Giovinazzi pitted for fresh soft tyres when the safety car came out at the end but had no opportunity to use them to his advantage.

Grosjean's fiery crash, with the car split in two and penetrating the metal barriers, brought out the red flags after one lap and was the main talking point of the evening. The Frenchman suffered burns to his hands. Magnussen damaged his front wing at the re-start and had to pit. 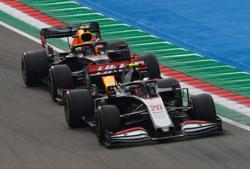