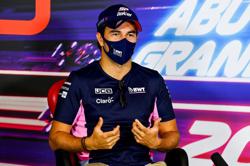 MANAMA, No 27 (Reuters) - Ferrari will support a freeze on Formula One engine regulations starting in 2022, team principal Mattia Binotto said on Thursday, which would enable Red Bull to use their Honda power units even after the Japanese manufacturer leaves the sport.

Honda, which exclusively supplies Red Bull and sister team AlphaTauri, is set to bow out of Formula One at the end of the 2021 season leaving the two outfits looking for a new supply.

Red Bull's preferred option is to acquire the intellectual property of the Honda power unit and continue using it for its two teams. But they have said that would only be financially viable if expensive engine development was frozen.

Ferrari had been against the move to freeze engines even as rivals Mercedes, who have won every championship since the current engine rules were introduced in 2014, have supported it.

But after meetings in recent days with the sport's commercial rights holder and the governing FIA, Binotto said the Italian manufacturer had changed its mind provided the introduction of a new power unit, whose details are yet to be worked out, is brought forward a year from 2026 to 2025.

"As Ferrari we understand the situation," Binotto told reporters at the Bahrain Grand Prix in a video conference from Ferrari's headquarters in Maranello.

Renault had also been opposed to an engine freeze. As the manufacturer supplying the fewest teams, they would have been obligated to supply ex-champions Red Bull and AlphaTauri. Their latest stand on the engine freeze was not immediately clear.

Binotto, whose team have been suffering from a lack of horsepower this season with their power unit seen as the weakest of the four manufacturers, said the sport was discussing putting in place a mechanism that would allow any engine maker lacking performance at the time of the freeze to catch up.

"I think those details will be important," he added.