PETALING JAYA: There will be a fierce teammate rivalry when the MotoGP season finale, the Portugal Grand Prix, gets under way this weekend.

After two difficult races in Valencia, the Frenchman is hoping that the new Algarve International Circuit in Portimao will help him recover his form to end the season on the podium.

With three wins each, they are the only riders to win more than once this season.

“It has been a long time since I rode at Portimao. I remember that the track is like a roller coaster, with an uphill section followed by a big downhill bit, so I am really looking forward to being there again, ” said Quartararo, who goes into the final round fifth in the championship standings with 125 points.

“It’s a shame we couldn’t bring the championship fight to this final round but I want to have fun in this last race.

“To do so, the first aim of the weekend will be to find a good feeling and speed that we lost since Le Mans. I hope that I can end the season and my two years with the team in a good way with a great result, ” said Quartararo, who will join the factory Yamaha team next year. 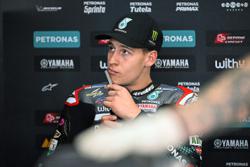