The Moto2 rider admitted he is still in pain from the injury he sustained in a horrific crash at the Red Bull Ring Circuit.

Hafizh was sent flying when he collided with the stricken bike of Enea Bastianini, who had crashed further up the track.

The Malaysian, who did not suffer any fractures, aims to get back into the points by working together with his technical team to get the best set-up for his Speed ​​Up bike.

Hafizh has only earned points in two races this season and definitely needs to start cracking with six races to go.

“I’m looking forward to Le Mans and to keep on improving as the last two races did not go very well for us.

“I feel fine although my leg sometimes bothers me when I move it and it still hurts.

“I’ll be working hard with the team to get back on the right track,” said Hafizh, who has collected 17 points. 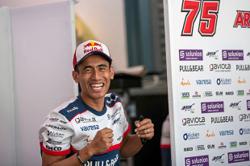