The KTM outfit, who are based in Munderfing, Austria, had done extensive testing at the Red Bull Ring there and will have an edge in their bid for back-to-back wins in the MotoGP class.

Quartararo said extreme weather conditions predicted for the weekend could hamper his plans to get back on the podium.

“We know that KTM will be strong as they’ve tested a lot there. They have a lot of important data to use in the races, ” said the 21-year-old Frenchman, who currently leads the championship standings with a healthy 17-point advantage over second placed Maverick Vinales (Monster Energy Yamaha).

“We will have to check out the track conditions when we arrive. At the moment the weather forecast is very mixed, but I think we can be quick there and be back on the podium. We will definitely be trying to repeat, at least, the top-three finish from last year.

“It wasn’t the best weekend at Brno but we will go to Austria with nine more points in the championship. The Austrian track is one that I really like and I’m really looking to the next two races there.”

Quartararo’s teammate, Franco Morbidelli, is also concerned about the weather conditions although he’s buoyed by his first podium finish in the MotoGP class last week. Morbidelli finished second while Quartararo was seventh.

“We will have to see what the conditions are like and how we feel in the first practice session on Friday (today), ” said the 25-year-old Morbidelli.

“I think it has finally sunk in that I achieved my first MotoGP podium finish the last time out. I’m really happy because it has given us a big injection of confidence going into these two races in Austria and the knowledge that we can fight at the front.” 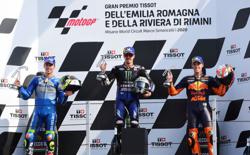