Kasma gets to keep his ride despite crash

PETALING JAYA: Rookie Kasma Daniel Kasmayudin does not have to fear losing his seat in the Moto2 world championship anymore. He is assured of his place for the time being.

His team ONEXOX TKKR SAG have secured enough money to continue racing for the next few races but will need more funds to buy new bikes.

The 19-year-old was in danger of losing his seat after the team’s sponsor withdrew their support due to the Covid-19 pandemic.

The team had to come up with funding within two weeks or Kasma would have been replaced by a foreign rider, who could attract sponsors.

Team principal Bobie Farid Shamsuddin said they would use part of the budget allocated from the Malaysian Cub Prix Championship and Asia Road Racing Championship to keep Kasma in the world championship.

“We still have to find ways to get additional funds to buy new bikes. We welcome any potential sponsor,” he said.

The last weekend was not great for Kasma, either. He finished the race after crashing on the third lap in the Moto2 race of the Czech MotoGP in Brno on Sunday.

Kasma, who started at 30th, said he lost the front tyre of his Kalex bike at a corner but hopes to continue adapting to the Moto2 category in the next round in Austria this weekend.

“I was pushing hard and I made a little mistake which ended in a crash at the beginning of the race.

“It wasn’t a good race for us but I have learnt from the mistake,” he said. 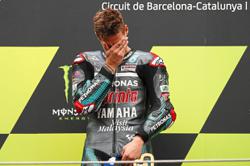 Hafizh misses out on points due to traction problem