Speedster Kasma in big race to catch up

PETALING JAYA: Kasma Daniel Kasmayudin (pic) is a speedster with a lot of catching up to do.

The Moto2 rider is set to link up with his team in Spain knowing that the training he has done so far is not enough and that he really needs to have more workout sessions.

The teenager of ONEXOX TKKR SAG Team, is set to leave for Spain this week for the Spanish Motorcycle Grand Prix will be held at the Jerez Circuit on July 17-19.

Kasma made his debut at the Losail International Circuit in March but crashed out in Lap 8 and although he has not competed for the last four months following the suspension of races, he still believes he can win the Rookie of the Year award.

He added that although the Jerez Circuit has barred private testing, he was confident of getting some training laps before the Spanish GP.

“My training will continue in Spain, I trained to maintain my fitness during the movement control order (MCO) but it won’t be enough, ” said the 19-year-old.

“I have trained in Sepang with ZK Racing and Sepang International Circuit (SIC) riders for the last couple of days... I had training sessions in the gym daily as well as running.

“I really hope the training plans will be able to help me to adapt to the MotoGP because I’m a newbie at this stage.

“Jerez has stopped private testing, which means we cannot use race bikes but we are still allowed to practice using other bikes.

“I believe we can get a few sessions to get used to the track.

“I’ll try to gain as much experience and work as hard as possible. My personal target is to clinch the best rookie title this year.”

Kasma, who will partner Australian rider Remy Gardner, said he hopes to get to Spain without any hiccups after Moto3 rider Khairul Idham Pawi (KIP) of Petronas Yamaha Sepang Racing Team (SRT) was barred from flying to Spain due to a ban by European Union.

He added he has been in touch with his team officials in Spain to ease his trip to link up with the team.

“It was a bit shocking to hear what happened to KIP but I think it was just a minor hiccup due to a change of regulations in Europe.

“I have been in contact with my team in Spain and all the relevant documents are ready... I believe I will have no problem travelling, ” added Kasma. No take-off to Spain Racing to get nod 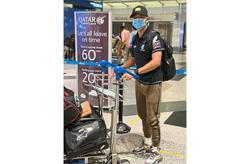 KIP’s wings no longer clipped – he can fly to Spain