MotoGP teams gird for new rules on the grid

PETALING JAYA: MotoGP teams are waiting for a finalised version of the standard operating procedures (SOP) to be used when the season resumes later this month.

Petronas Yamaha Sepang Racing Team (SRT) spokesperson Pol Bertran said the teams are currently preparing for the new season based on a first draft of the SOPs provided by MotoGP rights holders Dorna.

Moto2 and Moto3 were able to race at the Qatar GP in March but the full world championship grid – including the premier class – will assemble for the first time this year at the Jerez Circuit for the Spanish Grand Prix from July 17-19.

“We are waiting for the last version of this protocol (SOP) from Dorna but we do already know a number of restrictions and measures which will be enforced.

“For now, we know that we have to do a first (Covid-19) test three days before we travel to Jerez and we also know that we will only be allowed to be at the circuit and the (official) hotel during the race (weekend).

“The number of team members will also be limited and we will be focusing on having full technical staff, which is very important at this moment.“We also cannot interact with other teams or keep contact limited as much as possible.

“Other measures include using face masks and shields. We need to work as a family, ” he said.

Most teams are expected to restrict their non-technical staff such as hospitality and in-house media personnel when the season starts. 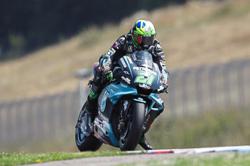