Azrai’s brace puts Malaysia back in the game 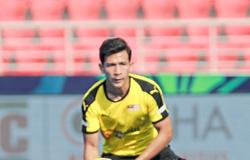 Azrai’s field goals in the 50th and 57th minutes saw the Speedy Tigers fight back from 1-2 down to clinch victory in a tense Group B battle where they needed to win to keep their semi-final hopes alive.

The 23-year-old’s heroics also earned him his first man-of-the-match award in an international tournament and also offers national coach A. Arulselvaraj some relief as Canada were threatening to end Malaysia’s campaign in the group stages.

The Canadians took the lead after a goalless first quarter through Sean Davis’ field goal in the 19th minute.

Firhan Ashari brought Malaysia back into the game after scoring from a penalty corner in the 33rd minute.

However, Canada hit back seven minutes later through a Gordon Johnston penalty corner to take a 2-1 lead.

Canada were down to 10 men after Davis received a yellow card in the 36th minute, followed by another yellow card for Matthew Sarmento in the 46th minute and the Tigers took advantage of the situation to score twice in the space of seven minutes to confirm the three points.

Malaysia must now beat Japan in their last match tomorrow and hope South Korea play at least to a draw against Canada to ensure they finish second to claim a semi-final berth.

Meanwhile, South Korea virtually booked their spot in the semi-finals after notching their second win in Group B when they defeated Asian rivals Japan 3-1 in an earlier match.