Toast of the team: Razie Rahim scored all the goals in the 3-3 draw with India.

PETALING JAYA: A Razie Rahim hattrick helped Malaysia stay alive in the Asia Cup as they survived a late fightback from India to snatch a 3-3 draw in Jakarta.

Razie was the hero again as the veteran hammered in two penalty corners in clinical fashion in the 12th and 20th minutes and the equaliser in the 55th minutes to leave the super four stage heading for a tight finish.

Meanwhile, South Korea enhanced their chances of reaching the final again after missing it in 2017 when they defeated Japan 3-1 in their second super four match yesterday.

Played under heavy downpour in the first half, South Korea’s most capped player Jang Jong-hyun, who was playing in his 298th match yesterday, put his side ahead in 10th minute through a penalty corner conversion.

Hwang tae-il slotted in the second from close range off a field goal in the 33rd minute.

The skies cleared in the second half but Japan’s chances remained gloomy as the Asian Games champions found it difficult to penetrate their opponents solid defence.

Koji Yamasaki, however, managed to break South Korea’s resilience to score from a penalty corner rebound in the 59th minute but the four-time champions replied within seconds through a Lee Nam-yong’s field goal.

South Korea started the super four with a 2-2 draw against Malaysia on Saturday.

Meanwhile, Bangladesh had something to cheer although they are only involved in the fifth-eighth place playoffs as Rashel Mahmud was honoured by the Asian Hockey Federation (AHF) with a merit recognition for being the only player to have featured in six consecutive Asia Cups.

“It has been a very memorable journey for me,” said the striker.

“It is a proud moment to have represented my country in six tournaments.”

Bangladesh defeated hosts Indonesia 4-2 yesterday and will play Pakistan in the fifth-sixth placing playoff on Wednesday.

Hosts Indonesia and Oman will fight it out for the seventh-eighth placing tomorrow at the Gelora Bung Karno sports complex. 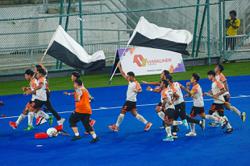