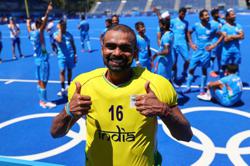 TOKYO (Reuters) - Indian hockey will get a massive shot in the arm after the men's team won the bronze medal at the Tokyo Games on Thursday, said goalkeeper Sreejesh Parattu Raveendran.

The most successful hockey nation in Olympic history with eight men's titles, India's last medal came at the 1980 Moscow Games when they topped the podium.

However, they ended their medal drought by beating Germany 5-4 on Thursday, with Parattu Raveendran saving the day by racking up nine saves, including a number of penalty corners late in the match.

"In the 1980s, we won the last medal and after that, nothing. Today we won it. This gives a push and gives energy to the youngsters to pick up hockey, play this game."

The goalie dedicated the medal to his father, with whom he had a celebratory video call on the pitch.

"He was the reason behind me being here and I just wanted to tell him that I achieved it and this medal goes to my dad," he added.

Parattu Raveendran said he was prepared to do anything to close out the win against the Germans and told himself he had been working towards this moment for so long.

"For the last penalty corners, I said the same thing: 'You worked hard for the last 21 years and this is what you want to do now, that one save,'" he said. 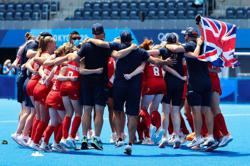