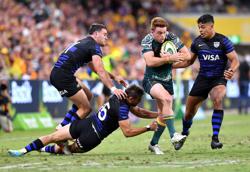 TOKYO (Reuters) - Germany became the first country to reach the semi-finals in the men's hockey tournament after a smooth 3-1 win over Olympic champions Argentina in sauna-like conditions at the Tokyo Olympics on Sunday.

Germany opened the score in the 19th minute when defender Lukas Windfeder shot a penalty corner low and hard at the left side of the goal, leaving Argentina goalkeeper Juan Vivaldi no chance to stop the ball.

Ten minutes into the second half, the German side added to their advantage after playing out another penalty corner in a beautiful variation which ended with Timm Herzbruch deflecting a low pass from captain Tobias Hauke into the goal.

Windfeder scored another goal, again through a penalty corner, in the 48th minute, effectively securing Germany's spot in the semi-finals and leaving Argentina with a painful loss.

With eight minutes left to go, Maico Casella Schuth scored off a penalty corner for Argentina, but they were not able to add to their score.

Officials doubled the usual two-minute between quarters to allow players to cool down from the heat at the main pitch of the Oi Hockey Stadium, which was sprayed with water during the half-time break to keep play fast and smooth.

The win gave Germany revenge on Argentina after being knocked out by them in the semi-finals of the 2016 Rio Olympics, when the Germans had to settle for bronze.

Argentina's lineup in Tokyo still contained many of the name that brought the country their first Olympic gold medal in hockey in 2016: Pedro Ibarra, Agustin Mazzilli, Matias Rey and 42-year-old goalie Vivaldi.