PETALING JAYA: A defeat against Japan in a friendly match did not look good for Malaysia but national hockey centreback Syed Syafiq Syed Mohd Cholan begged to differ.

One would feel upset over such a result, but Syed Syafiq said it was a learning curve for the players, after all they had not been playing in the international stage for almost two years.

“I feel that we did well, but there’s room for improvement in our game that cannot be denied. We are still in the process phase where we are trying new tactical moves in this team, ” said the 25-year-old, who played for Tenaga Nasional in the Malaysian Hockey League (MHL).

“So, everyone needs to stick together and trust our process system.”

Malaysia will face Britain today, and it will be a tougher match-up for A. Arulselvaraj’s boys.

Plus, they are facing the side that ended their Olympics dream. Malaysia failed to qualify for the Tokyo Olympics after losing to Britain by an aggregate of 9-3 in the qualifiers in 2019.

And it was their last international fixture before the Covid-19 pandemic struck.

“Britain have had a competitive tournament as they were involved in the Pro League as part of their preparation for the Olympics. For sure, they have prepared well in every aspect, ” said Syed Syafiq.

“But that does not mean that we will go into the game with fear and too much respect for our opponents. We will do our best to give our opponents a run for their money.

“International level is different because you’ve to be at a different physical and mental level. But for me, the most important thing is to focus on the basic skills and play with confidence.

“Mistakes will happen, but we will have to learn from it and that’s the difference between a good and a top team. We want to be a top team!” 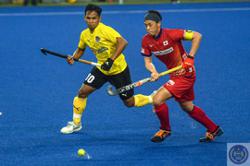