IPOH: Perak hockey forward Arif Sabron is ready to face whatever challenges that come his way when he plays for Butterfly Roma Hockey Club in the Serie A1 (Italian hockey league) later this month.

The 22-year-old believes he has what it takes to face bigger European players as well as overcome other factors like the weather and food.

“I intend to go there and not think about these things as I have a purpose and I have set myself up mentally to do well.

“I have no fear about taking on the bigger-size players. Whoever comes my way, I’ll just bulldoze my way through, ” he said at a press conference after being chosen to join the Butterfly Roma club.

Arif, who hails from Felda Gunung Besout, Sungkai, also vowed to do his best to bring glory to Malaysia and thanked all parties, especially Butterfly Roma, for giving him the chance to compete in the Italian league for three months from March 15 to June 15.

The initiative was mooted by Megat, who is also the Paralympic Council of Malaysia (PCM) president and who had been appointed as the hockey ambassador for Italy in Malaysia since 2019, and Selvaraju, who used his extensive coaching experience overseas, including in Italy, and his good relations with the club to get Arif the chance.

Arif, who will be the fifth player from Perak to get the opportunity to play overseas, had featured for Hockademy in the Malaysian Hockey League (MHL) last year.

Khairul Shahril said as a token of appreciation and motivation for Arif, the state government, through the Perak State Sports Council, would channel assistance to the player, such as the return air ticket to Rome and RM2,000 cash aid. — Bernama 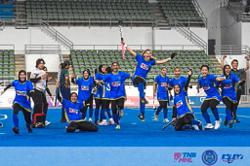