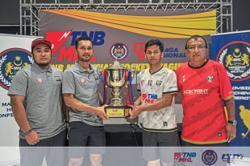 The Universiti Kuala Lumpur (UniKL) midfielder spent half of last year recovering from a hamstring and fibula injuries but he has been given a clean bill of health.

In the first half of the year, he helped the team win a treble of Charity Shield, league and TNB Cup titles.

Now that he is back in action, the 22-year-old is ready to help UniKL retain the titles they won last year.

“The year 2020 has been bittersweet because I had a good MHL outing, but injuries after that slowed me down. I could not impress during the selection trial. Now, it’s all good, ” said the player, who hails from Melaka.

“This year, we will not have imports, and we have a new coach (Megat Azrafiq Termizi) on board, but the players are still passionate to do well for the club.

“This is evident from the players’ eagerness and commitment shown via the virtual training sessions.

“Coach Megat has come up with a new training programme and we are able to cope.”

Faid said he was not going to think too much about national selection but intends to stay focused in giving the best for his team.

“Last season, I had four assists and helped in terms of ball recovery in midfield. I hope to do better this time and have more assists, ” said Faid, who also hopes to score goals.

“If my form in the league is good, I am sure the national selectors will take notice.”

All the players have been tested negative for Covid-19 after taking swab tests and they are expected to start training at the pitch this week.