All’s safe and sound with constable Shafie around

PETALING JAYA: To protect and serve is the calling of the men in blue.

So safeguarding the goalmouth from being penetrated in a hockey match, sort of, comes naturally to constable Mohd Shafie Sahrom.

The 24-year-old Shafie impressed coach A. Arulselvaraj during the recent Razak Cup tournament to earn a call-up for a three-week training stint with the national hockey team.

Despite not playing the game for one year because of his duties, he did enough for Arul to retain him for the second phase.

“I’m shocked to be in the second phase because I felt there were other capable goalkeepers. So, to be selected again, I have to repay the faith shown by coach Arul, ” said Shafie.

“I take this development positively. I still have to improve on my game. My experience is still lacking and I need more physical training to adapt to international competitions.

“In the first phase, I felt a little nervous because I showed too much respect to the others and it showed during training sessions. Also, I was shaking in my first sparring match. However, the days in the National Sports Council (NSC) have helped me bond with other players and now I feel better in terms of chemistry and understanding.

“To adapt to the coach’s training methods I had to force myself because I did not undergo full-time training for quite a while due to my police work. Now I just try to keep up with the experienced goalies in the squad.”

Many were surprised when he upstaged Zaimi Mat Deris for the fourth keeper spot and now he has to compete with Hairi Abd Rahman, Adrian Andy Albert and Hafizzuddin Othman to stay in contention for a place to the Asian Champions Trophy in Bangladesh next year.

“I know what the coach wants – players who show real effort and constantly motivate others with positive talks. I will do just that in the next phase and prove that I have what it takes to play for the nation.” 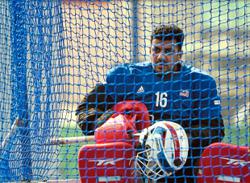