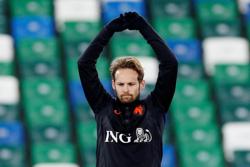 A welcome distraction: Firhan Ashaari (left) working hard in training in order to be selected for the 25-men national team.

PETALING JAYA: There’s not a single day that goes by that national hockey player Firhan Ashaari does not think of his late daughter.

And the forward has vowed to do whatever it takes to make the squad of 25 players as a dedication to his daughter.

Although the past one month have been tough on him, he refuses to dwell on his sorrow.

“I’ve got to be strong. Right now, I tell myself that I’m fighting for my late daughter. I will give my all for her. From now on, every success I achieve, I will dedicate it to her.”

“Nothing is tough. You only need to focus on training and give your best. Yes, the competition among us is immense, but that is what I need right now.

“It will not only improve the quality of my game but also give me the mental strength to succeed,” said the 27-year-old.

“The intensity during training is high as everyone wants to prove to the coach (A. Arul Selvaraj) that they are worthy of a spot.”

Firhan, who has 185 caps, made his debut in the Asian Champions Trophy in Ordos, China in 2012.

His last assignment for the country was in last year’s FIH World Series where Malaysia lost 1-0 to Canada in the final.