A job well done: Perlis striker Tengku Ahmad (left) celebrating with teammates after beating Penang 3-2 in the Razak Cup Group A match at the National Stadium in Bukit Jalil. — MHC

The northerners upstaged heralded Penang 3-2 in their final Group A match to book their quarter-final spot at the National Hockey Stadium in Bukit Jalil yesterday.

Perlis, who were Division Two champions last year, were held 2-2 by reigning Division One champions Melaka on Friday leaving them in a must-win situation.

And they bounced back in style with Mughni, who just turned 18 last month, firing in the winner.

Tengku Ahmad said although it was a slim victory, the end result mattered.

“Credit goes to the youngsters. They worked hard for this win. We were desperate because this is our last game and we needed a win to advance, ” said the 34-year-old international.

“I kept reminding them to continue giving 100% and they heeded my advice and in the end, it worked.

“They have learnt well from the Melaka game. We managed to pace ourselves better in all four quarters.”

Tengku Ahmad added that the youngsters would have to brace themselves for another test in the last eight.

“We’ll see if they can cope with the pressure at this level, it will be hard but if we raise our efforts and discipline we will see result. 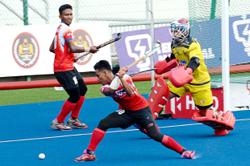