KUALA LUMPUR: The national men’s hockey team are fired up for a roaring success in the Asian Champions Trophy in Dhaka, Bangladesh, in November after inking a massive RM1.5mil deal with Puma. Sportswear manufacturer Puma signed a three-year sponsorship with the Malaysian Hockey Confederation (MHC) yesterday to provide full attire for the national from 2021 to 2023.

MHC president Datuk Seri Subahan Kamal said the deal from Puma should motivate the players to go the extra mile in competitions.

“We are honoured and grateful. Puma is one of the leading sports outfits in the world and they have sponsored major football clubs like Dortmund and Borussia Moenchengladbach, ” said Subahan.

“Although the contract begins next year, we will use the new jersey at the Asian Champions Trophy.

“The new attire will definitely boost our team’s morale and we hope that they will put up a strong challenge in the tournament, ” said Subahan.

Subahan said the sponsor was impressed with the men’s team standing in the world.

Subahan added that they would unveil three new jersey colours with the Puma logo by end of October after signing the contract with Active Sports Centre S. Murugeson at the National Hockey Stadium in Bukit Jalil yesterday.

Active Sports Centre is the entity responsible for Puma’s sponsorship and its corporate affairs in Malaysia.

Murugeson said they were proud to be associated with the Malaysian national team because to him, hockey is the second popular team sport in the world after football.

The Asian Champions Trophy is the only tournament left for the team this year.

Subahan said all 34 players in the training squad had their swab tests taken and had returned negative. 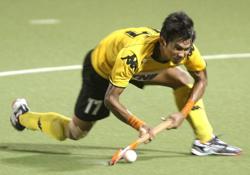 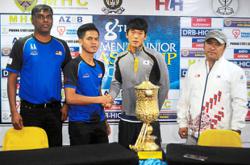