KUALA LUMPUR: Malaysia lost hockey legend Lawrence Joseph Van Huizen (pic) after the former Olympian and ex-national coach died at the Seremban Hospital at 4.30am Saturday (Aug 17). He was 89.

Lawrence, who played hockey for Malaysia in the 1958 and 1962 Asian Games in Tokyo and Jakarta, respectively, and the 1964 Tokyo Olympics, leaves behind wife Doreen Philomina Van Huizen alias Koh Kim Bee.

Lawrence is of mixed Dutch and Portuguese blood and hockey runs in his blood.

His son, Stephen van Huizen, is an ex-international and now is the national assistant coach with the men's hockey team.

And his grandson, Stephen's son, Joel is a national hockey player who featured in the World Cup in Bhubabeswar, India, last December.

Lawrence had contributed immensely for the country and also his state Negri Sembilan.

He was the assistant coach to Ho Koh Chye in the 1975 World Cup in Kuala Lumpur, where Malaysia finished a respectable fourth.

Lawrence was also coach of the national women's team for five years from 1981. 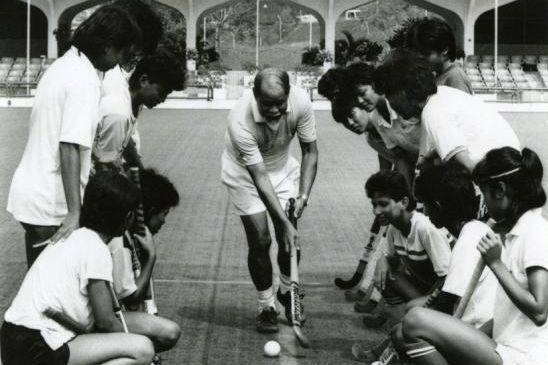 The former Standard Chartered bank employee had also coached the boys' and girls' schools in Seremban.

His greatest moment of his coaching career was when five of his St. Paul's Institution players featured in the 1979 Junior World Cup in Paris.

Lawrence, better known as Ogie, was truly an inspiration to all Malaysians.