When he is not too busy playing for Malaysia in international tournaments, Tengku Ahmad either takes his time to travel or jumps on his bike for a spin.

The 32-year-old forward has visited more than 20 countries since he made his debut for the national team at the 2006 Commonwealth Games in Melbourne.

Tengku Ahmad, who is from a royal family in Kedah, said his ambition was to travel to every corner of the world to see new places, meet new people and experience the different climates.

“Travelling opens up one’s mind and you also get to enjoy the different kinds of food and culture,” said Tengku Ahmad, who has travelled to Europe, Latin America and Asia, thanks to his involvement in hockey.

“I love Europe as they have beautiful ancient buildings and the weather is much cooler than our hot and humid weather in Malaysia.

“One of my favourite places is Queenstown in New Zealand as it has nice hilly views. It’s a lovely place to stay too. 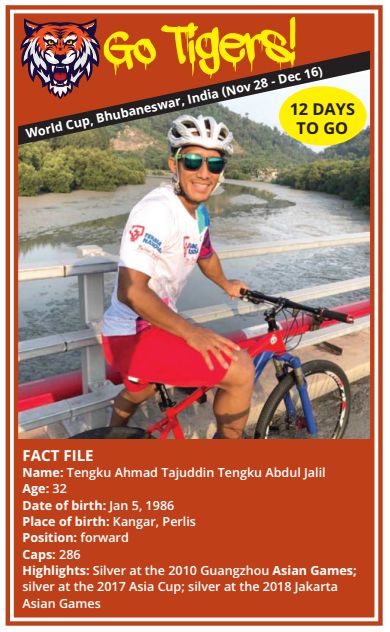 “Two years ago, I took my family for a holiday in Glasgow and we thoroughly enjoyed the place and people there.”

And to remember the places he has visited, Tengku Ahmad collects souvenirs.

“I’ll buy keychains and fridge magnets from different countries. I pass it to my family members and also friends,” said Tengku Ahmad.

While travelling relaxes his mind, Tengku Ahmad said he picked up cycling to keep himself fit.

“I used to cycle in Manjung, Perak, and enjoy the rivers and the forests. I love the breeze,” said Tengku Ahmad, who also cycles to other parts of the Malaysian countryside.

For now, he hopes for a cycle of success in hockey in his last World Cup in Bhubaneswar, India, which begins on Nov 28.

“Besides enjoying the beauty of Bhubaneswar as I have not been to this part of India, I also hope to give my best in my second World Cup,” said the father of two children.

“I’m already 32 and this will be my last World Cup. I want to do my part in helping Malaysia reach the second round.

“In the last World Cup, I scored one goal in six matches but this time, I hope to contribute more goals,” said the skilful Tengku Ahmad, who is the most experienced striker in the team.

Malaysia must finish in the top three of their group to reach the second round.