PETALING JAYA: National gymnast Mohd Sharul Aimy believes Malaysia have the depth to send a men’s team for the next Olympic Games in Paris in 2024.

Malaysia have only competed in the men’s individual event in two Olympic Games. Jeremiah Loo featured at the recent Games in Tokyo while Ng Shu Wai represented Malaysia at the 2008 Beijing edition.

Sharul hopes more emphasis and international exposure will be given to the men’s team.

Besides Sharul and Jeremiah, the others in the team are Tan Fu Jie, Zul Bahrin Mat Asri, Ng Chun Chen, Luqman Al-Hafiz and Teoh Chuen Feng

“Even Taiwan had a men’s team in Tokyo. If they can, we are also capable of sending a team,” said Sharul.

At the Ariake Gymnastics Centre, Taiwan finished 10th out of 12 teams.

“This Taiwanese team have competed in many competitions, and it is time for Malaysia to focus on their men’s team too, instead of just focusing on one or two gymnasts. We have a good mix of experienced and newcomers in the national team.

The 19-year-old Sharul admitted the quality of performance was high in the Olympics.

“The top gymnasts have high level of difficulties in their executions. We have to improve in that area too.” 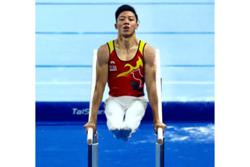