TOKYO: Simone Biles will not compete in today’s floor exercise final, leaving her with just one more event to win another medal at the Tokyo Games.

USA Gymnastics said yesterday that Biles had withdrawn from the event final for floor and would make a decision later this week on the beam, the one remaining event she has qualified for at this Games.

“Either way, we’re all behind you, Simone,” USA Gymnastics added in a tweet.

It was not immediately clear who would take her place.

Biles shocked the world when she withdrew from the team finals on Tuesday after a single vault, citing mental health issues. She has received an outpouring of support from athletes, officials and fans, including former first lady Michelle Obama and International Olympic Commission (IOC) president Thomas Bach.

She has since withdrawn from all the other competitions she was eligible for, except the beam, which is scheduled to take place on tomorrow.

The 24-year-old Biles came to Tokyo with high expectations as she gunned for six gold medals, which would have made her the most decorated Olympic woman.

She earned a silver from the sidelines in the team competition and later cheered US teammate Sunisa Lee to gold in the all-around. Her decision to drop out of three more finals means she won’t defend any of the other golds she won in Rio, on vault and floor exercise. — Reuters 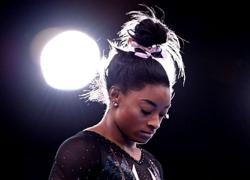