Jeremiah set to make Olympics debut thanks to turn of events

Counting his blessings: Jeremiah did not make the cut for the Olympics based on his 87th place finish in the world championships in Germany in 2019.

PETALING JAYA: In an unexpected turn of events, top national men’s artistic gymnast Jeremiah Loo is now on the brink of competing in his first Olympic Games in Tokyo.

The 23-year-old Jeremiah is set to make the trip to Tokyo in July as one of the two representatives from the Asian continent.

Following the cancellation of the Asian Championships in China, which was supposed to be the Olympics continental qualifying event this month, two top Asians based on the 2019 World Championships results get to go.

And based on a set of criterias, Dinh Phuong Thanh of Vietnam and Jeremiah are the next ranked eligible gymnasts from the Asian region for the Olympics. The other top Asians ahead of them have already qualified on merit.

Besides, there is also a ruling that a country can only have one representative each in the men and women’s category if they did not qualify by merit.

Both Jeremiah and Phuong Thanh are now waiting for the world body to confirm the list in June.

“I did not make the cut for the Olympics based on my 87th finish in the world championships in Germany in 2019... I accepted the fact that I will not get to go for the Tokyo Games, ” said Jeremiah.

“Now, another chance has opened up following the Asian meet cancellation. I’m one of the two gymnasts on the list but let’s wait for the official announcement.”

If he gets to go, Jeremiah said he would be ready despite the lack of competitions to test where he stands.

“I’ve been training since July last year in Bukit Jalil under the quarantine approach but have not competed in any tournaments. I’ve been preparing for the Vietnam SEA Games, ” he said.

“We are now under the re-allocation period following the scrapping of the Asian meet. Based on the criterias, Jeremiah and a Vietnamese are in the list but it’s not official yet, ” said Afrita.

“This is because several other continental events are going on, once that’s done, FIG will release the final list, ” she said.

Once confirmed, Jeremiah will join top female artistic gymnast Farah Ann Abdul Hadi as one of the two representatives for Malaysia in the Tokyo Games. Farah booked her spot at the 2019 world meet.

Malaysia never had more than one gymnast taking part in the Olympic Games. 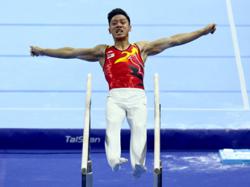