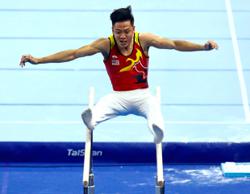 “I just want to go out there and do my very best this time,” said Farah.

“This is my second Commonwealth Games and I want to go a notch higher. I’ve set myself a target of scoring 13 points and above in all my events,” added the 20-year-old.

“It will be different this time around. I’m not going to be wide-eyed as I was in New Delhi. I know what to expect in Glasgow,” said Farah who took a seven-month rehabilitation after the Sukma last July to recover from her injuries.

On her return to competition, Farah bagged two bronze medals in the team and floor exercise (13.150) at the Artistic Celtic Cup-Commonwealth Invitational in Perth, Scotland, in April.

“I’m working hard in training to get better in my executions. One thing’s for sure – the competition will be tough in Glasgow. Unlike previous Games, all the countries are sending their A teams,” said Farah, the 2011 SEA Games silver medallist in the uneven bars. 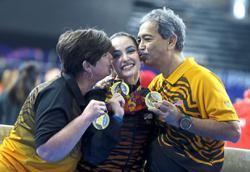 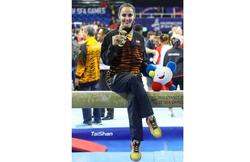 Olympics-Gymnastics-German women take a stand in full-body suits in Tokyo
Olympics-Gymnastics-Novice Japan men's team out to prove themselves
Olympics-Gymnastics-How gold can she go? Biles shines in training amid virus worries
Gymnastics- Power of two: Twins excel on Olympic stage
Farah and Jeremiah bubble with excitement over first day of training
Olympics-Gymnastics-Biles pushes her limits by doing the 'unimaginable'
Chinese gymnasts out to bury Rio demons
Farah eyes far-out show
Debutant Farah excited to compete with eight-time Olympian Oksana
Farah zooms in on Olympic preparations in style