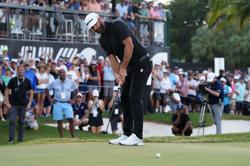 (Reuters) - Tiger Woods has won the PGA Tour's Player Impact Program (PIP) for a second consecutive year and with it the $15 million bonus given to the winner, according to results obtained by Reuters on Tuesday.

Woods has played only nine rounds of golf across three majors in 2022 but remains the game's top draw as defined by the PIP, which measures a player's popularity based on five criteria like media mentions and broadcast exposure.

World number one Rory McIlroy was rewarded with $12 million as the runner-up while Jordan Spieth ($9 million), Justin Thomas ($7.5 million) and Jon Rahm ($6 million) rounded out the top five, according to the memo sent to players.

Woods finished first in four of the five PIP categories, the only exception coming in "TV Sponsor Exposure" which measures the amount of time a player's sponsor logos appear on screen during weekend PGA Tour telecasts.

Woods only played three weekend rounds this year, two at the Masters and one at the PGA Championship.

The PIP was implemented in 2021 as a way to reward members who, through a series of metrics, are shown to drive the most positive interest in the PGA Tour.

The program was expanded this year to include the top 20 players and $100 in total payouts, up from 10 players and $40 million last year.

Masters champion Scottie Scheffler ($5.5 million) was sixth on the list while the next four players -- Xander Schauffele, U.S. Open winner Matt Fitzpatrick, Will Zalatoris and Tony Finau each earned $5 million.

Hideki Matsuyama, Cameron Young and Sam Burns -- who would have qualified under the slightly-modified criteria being used for 2023 -- were added to the list and will each get $2 million. 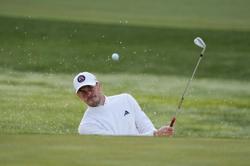