Anson Yeo is up to second among the Malaysians in the men’s world amateur rankings.

AUSTRALIAN-based Jeneath Wong and Marcus Lim, attached to Washington University in St Louis, Missouri, were Malaysia’s top movers in the World Amateur Golf Rankings (WAGR) this week, albeit not gigantic by any means.

The country’s two leading players in the rankings, Ashley Lau and Khavish Varman Varadan both lost ground, in retreats.

Malaysia’s topped ranked women’s player Lau slipped two slots down to 29th in the world, while Khavish dropped 19 places to 189th in the men’s category.

Jeneath remained second on the Malaysian list, but she did climb two places up to 72nd, which is still 11 slots off her best standing to date.

She will surely improve on that after winning the gold medal in the individual and team events at the Malaysia Games this week. The same will aplly for her teammates Ng Jing Xue and Victoria Tan.

It also secured the Melbourne-based player her 11th win in tournaments with WAGR ranking points, and the 24th top-10 finish.

Sitting in third place on the Australian Women’s Order of Merit and winner of the 2022 Australian Women’s Amateur Masters, with a four-under-par total, Jeneath obliterated the adidas 6s World Final field, finishing six shots clear of the rest.

Amelia Harris was second with a 220 total and Grace Lee third, another four strokes adrift.

Reportedly on her way to study at Pepperdine University in California, Jeneath won herself an invitation to the Sandbelt Invitational in Melbourne in December, and two starts on the Ladies European Tour in 2023.

The only other player in Malaysia’s women’s top-10 to have made up two or more places in the rankings was was Xin Yao Wang. She moved up four rungs to 424.

Yao Wang won the two-day Kejohanan MSSM Tournament with a 142 total, carding rounds of 72 and 70.

That earned her a four-shot win over Ng Jing Xuen, who ahead of Yao Wang in the rankings, at 334. Third was Alya Afza Hazari, another seven shots back.

In the men’s category, both Marcus Lim and Zubair Firdaus moved up 10 places, while Anson Yeo consolidated his second spot on the Malaysian list by climbing two slots up.

Marcus, with a career best 200th in the world standings, moved up to 390 on the back of a fifth-place finish at the Turning Stone Intercollegiate tournament.

Zubair made his way up to 931st after a 13th place finish at the Gene Miranda Falcon Invite.

It is unclear why Zubair and Bryan Teoh, 505 in the rankings, have not been named in Malaysia’s team for the 13th Asia-Pacific Amateur Championships (AAC) next month.

It appears that Isaac Chern Yi To, down in 818th in the world amateur rankings, and Hariz Hezri, even further back at 1,058th in the world, and have been preferred over the Zubair and Bryan for reasons yet to be divulged.

Unless Zubair and Bryan cannot make it because of college commitments or something similarly important, their absence from the Asia-Pacific Amateur Championships would be seen as an injustice.

Malaysia’s top-four players in the rankings make up the rest of the six-strong contingent - Khavish, Anson, Marcus and Nateeshvar Ganesh (ranked 447) – and rightly so.

The team will make its way to Amata Spring Country Club in Chonburi, Thailand, from Oct 27 to 30. 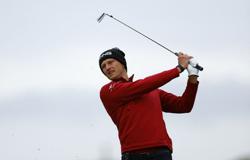