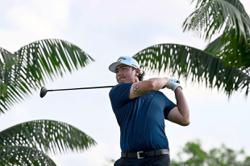 PETALING JAYA: It’s heading to an exciting climax as Gavin Green (pic) maintained his lead in the US$1.5mil (RM6.66mil) International Series Singapore but was joined by Phachara Khongwatmai from Thailand.

Gavin, the Asian Tour number one in 2017 and the leader after the first two days following a pair of stunning seven-under 65s, returned 72 to stay at 14-under while Phachara shot 69 at the Tanah Merah Country Club yesterday.

Taiwan’s Chan Shih-chang and Thailand’s Nitithorn Thippong are a shot behind following rounds of 66 and 68 respectively while England’s Steve Lewton came in with a 69 to sit a stroke further back.

Play was stopped at 11.10am and resumed at 1.30pm because of inclement weather.

Both Gavin and Phachara are chasing their second wins on the Asian Tour, with the Malaysian having won the Mercuries Taiwan Masters in 2017 and the latter the 2021 Laguna Phuket Championship.

“It was a grinding day, it was such a grind, I could not get anything going,” said Gavin, whose birdie on eight was offset by a dropped shot on 13th – a stark contrast to his 14 birdies and no bogeys on the first two days.

“Nevertheless, I just hung in there as hard as I could, making pars from everywhere, sometimes you just got to do that.

“Golf is not a game you can be perfect all the time, my caddie kept saying, ‘stay in it, stay patient, keep trying and hit good shots,’ and you know what we made a lot of saves today, it was kind of a saving day. We are still in it, 18 more holes, I think it’s going to be fun,” said Gavin.

Phachara will be looking to put a strong fight to deny the Malaysian glory today.

“Today everything wasn’t bad, only one thing was my putting. Because I hit it pretty well, same as in the first and second rounds, but missed a lot of putts.

“I hope tomorrow the putting is going to work,” said the Thai. Golf-Woods to be part of Team USA in 'some capacity' at 2023 Ryder Cup: Johnson
Golf-Fox pays tribute to 'great mate' Warne after Alfred Dunhill win
Tournament activity picks up
adidas raises awareness of sustainability and inclusivity
New Stratos golf shoe made for comfort, grip and style
How to improve your swing
Golf-Scott doesn't view LIV Series as 'pure evil' for the game
Golf series has Malaysian fans yearning for international action
Golf-PGA Tour files countersuit against LIV Golf
Golf-Mickelson and three others drop out of LIV Golf lawsuit against PGA Tour