Golf-Koepka latest to sign up for LIV Golf series - ESPN 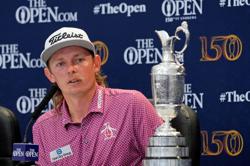 The PGA Tour -- where American Koepka has won eight titles -- has already suspended members who signed up to play with LIV Golf and said any others who make the jump will face the same fate.

LIV Golf did not immediately respond to a Reuters request for comment.

When four-times major winner Koepka was asked about LIV Golf at the U.S. Open last week, the 32-year-old criticised the media for constant questions on the issue, saying they only served to throw a "black cloud" over the year's third major.

Koepka's younger brother Chase also played in the inaugural event where even the last-placed golfer pocketed $120,000.

The lucrative rebel league's second event is in Portland from June 30-July 2 at the Pumpkin Ridge Golf Club.