PETALING JAYA: National No.1 women’s golfer Kelly Tan (pic) stayed on course in her quest to secure an LPGA Tour card for next season, but it was the end of the road for rookie professional Alyaa Abdulghany.

The 28-year-old Kelly survived the opening 72-hole challenge of the four-day LPGA Q-Series which ended on Sunday at the Magnolia Grove Golf Course in Alabama.

Pauline Roussin-Bouchard of France stood out in the opening week by compiling a brilliant 19-under 267 to finish first in the 110-player leaderboard.

All scores from the halfway point will be carried forward to the second week’s final battle for the 45 Tour cards, starting this Thursday at the Highland Oaks Golf Course.

Kelly had to return to the Q-Series re-earn the membership after losing it this season.

Only the top 100 point-finishers on the season-long Race to CME Globe standings get to retain their Tour card for next season, but Kelly could only finish 140th.

Alyaa, who battled her way through from the first two stages of the Series in the past few months, failed to perform when it mattered most.

Despite falling short in her maiden bid, it’s not all lost for Alyaa.

That’s because all those who made it to the third and final stage of the Q-Series would be handed an exemption to compete in the second-tier Symetra Tour next season.

The Symetra Tour is another avenue for players to qualify for the LPGA Tour as the developmental circuit rewards its 10 most outstanding performers of the season with a promotion to the main tour.

Alyaa can also attempt to qualify for LPGA Tour events on an ad-hoc basis as some of them make several spots available through a Monday Qualifier.

Alyaa did previously earn a ticket via such a one-day event when she qualified for the Cambia Portland Classic back in September. 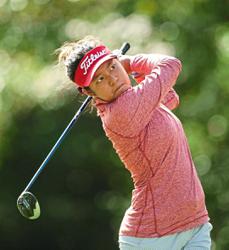