The fortunes of number one ranked amateur Keita Nakajima (left) and defending champion Lin Yuxin will be closely followed.

THE world’s top-ranked amateur Keita Nakajima and defending champion Yuxin Lin are the main drawcards of the men’s Asia-Pacific Amateur Championship that is scheduled for Dubai Creek Golf & Yacht Club in the United Arab Emirates from Nov 3 to 6.

This, though, is not to say that any of the others in the field will not win it. On the contrary, this is a high caliber tournament featuring the cream of the crop from the Asia-Pacific region.

But when things do get underway, much of the spotlight will focus on Japan’s Nakajima and China’s Lin.

Nakajima has been in fine fettle recently and galvanised the point with deserved wins at the Japan Amateur Championship and the Panasonic Open, an event on the Japan professional Tour.

“I’m an amateur who is at college, so it is an honour that I get the chance to play against the pros,” said Nakajima. “It provides me with a great challenge to compete against them and it has helped me become a better player.

“My confidence is high but I know I will still have to play at my best in Dubai to be in contention.

“I would like to be with Hideki (Matsuyama) when he defends his Masters title next year, so this is my best chance to fulfill that dream and get to play alongside him at Augusta National,” added Nakajima, who is assured of a place at the 2022 British Open and US Open, as a result of winning the McCormack Medal this year.

For his part, Lin said: “It would be a dream come true if I can win the Asia-Pacific Amateur Championship for a third time.

“To be in the same bracket as Hideki as a two-time champion is surreal, so to go one ahead would be amazing,” said Lin, who was T30 in the 2020 European Tour’s Abu Dhabi Championship.

“It is an incredible opportunity to gain an invitation to the 2022 Masters and a place in the 150th British Open at St Andrews. It will be a tough task but I will give it my best shot.” 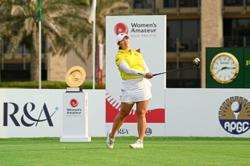