Noraishah Alisa will be in action.

MALAYSIA will have two sisters in the field of this week’s Hana Financial Group Championship in South Korea.

Norezrine and Noraishah Alisa, according to the organisers, will come up against some real top-class competition when the event gets under at Adonis Country Club in Pocheon, Gyeonggi-do on Thursday.

Included in the second edition of the tournament are New Zealand’s world number six and two-time Major winner Lydia Ko, who also won a bronze at the Tokyo 2020 Olympics, world number 10 Minjee Lee of Australia, who captured her first Major title at the Evian Championship in France in July and American Yealimi Noh, who made her Solheim Cup debut earlier this month at Inverness Golf Club in Toledo, Ohio.

Singapore’s Shannon Tan and Thailand’s Jaravee Boonchant and Onkanok Soisuwan are also in the field of the Ladies Asian Tour (LAT) Series tournament that carries prize money of US$1.2mil.

The event will be held without spectators and stringent Covid-19 safety measures will be enforced to ensure it remains safe for all involved.

Commenting on this, Hana Financial Group Championship tournament director Paul Park said: “Thorough and extensive precautionary measures to ensure the safety of the players, caddie, and event officials have put in place.

“In particular, a separate hotel and shuttle bus has been prepared exclusively for players coming in from overseas.” 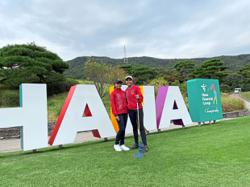