LONDON (Reuters) - The British Open will return to Royal Portrush in Northern Ireland in 2025 following the successful return of the championship to the course in 2019, the R&A said on Wednesday.

Irishman Shane Lowry capped a memorable return to Northern Ireland for the Open for the first time since 1951 when he claimed the Claret Jug two years ago.

"We could not be more thrilled to be bringing The Open back to Royal Portrush in 2025," Martin Slumbers, chief executive of the R&A, said in a statement.

"There will be huge excitement among golf fans around the world to see the best men's players facing the challenge of this magnificent links once again."

The Antrim coastal course was widely-praised for its hosting of the 148th Open with 237,750 fans attending during the week.

An independent report produced by the Sport Industry Research Centre at Sheffield Hallam University found that the Northern Ireland economy benefited directly to the tune of 45 million pounds ($61.92 million) with an additional 37.3m of advertising equivalent value (AEV) generated by global television coverage.

"The Open in 2019 was a massive success and showed just how much collective enthusiasm, passion and commitment there is to make Royal Portrush one of the leading venues for the Championship and to build a distinctive golf tourism brand for Northern Ireland," Slumbers said.

Northern Ireland's Deputy First Minister Michelle O'Neill said the return of the Open to Portrush would help stimulate investment in the local economy in the COVID-19 recovery era.

"Following a tumultuous period that has greatly affected travel, tourism and events I now look to the future with greater optimism as well as look forward to welcoming our international visitors back to the north coast to explore the very best of what we have to offer," she said. 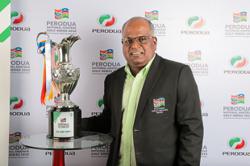