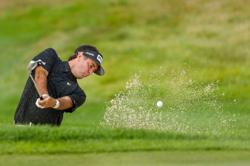 (Reuters) - As the United States put the finishing touches to preparations for this week's Solheim Cup, the American women have been enjoying a slew of advice from twice Masters champion Bubba Watson.

U.S. captain Pat Hurst, speaking to reporters on Wednesday ahead of Saturday's start at Inverness Club in Toledo, Ohio, said Watson, a 12-times winner on the PGA Tour, reached out himself to offer his services.

Watson, who will play in a celebrity match at Inverness Club on Thursday, brings a particular appreciation of the biennial team event between Europe and the United States given that he has competed in four Ryder Cups and was also named vice captain in 2018.

"He's been a lot of fun having him in the locker room hearing his take on a lot of the things, and a lot of times we have to tell him that, 'Hey, men and women are a little bit different' and I think he's definitely seeing that," said Hurst.

"But we're all enjoying him around, players, caddies. We're asking him a ton of questions and it looks like, it seems like he's having just as much fun as we are with him around."

"He's available, and I think that's what makes it so special is you just have, you have a major champion, multiple major champion... walking around and being helpful," said Stanford.

(Reporting by Frank Pingue in Toronto; editing by Clare Fallon)