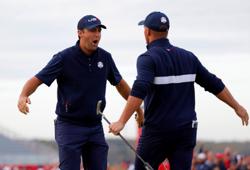 Yuxin Lin will be in Dubai to defend his silverware. – AP

THE 12th Asia-Pacific Amateur Championships is to be held at Dubai Creek Golf & Yacht Club in Dubai, United Arab Emirates (UAE) from November 3 to 6, 2021.

The announcement was made in a joint statement by the Asia-Pacific Golf Confederation, the US Masters Tournament and the R&A, on whose website it was carried this week.

The 2020 event was called off due to the Covid-19 pandemic. This week’s confirmation means that the championships will be held in the UAE for the first time.

The UAE is a member of the 42-strong Asia-Pacific Golf Confederation and Dubai hosts several professional and amateur tournaments annually, including the European Tour’s Dubai Desert Classic and DP World Tour Championship.

The joint statement from Asia-Pacific Confederation chairman Taimur Hassan Amin, Masters Tournament chairman Fred Ridley and the R&A chief executive Martin Slumbers, said in part: “This year’s historic win at the Masters Tournament by Hideki Matsuyama, a two-time Asia-Pacific Amateur champion, underscored the importance of this event as a platform for the game’s development and rising talent in the region.

“We are grateful for the support of the Emirates Golf Federation and Dubai Creek Golf & Yacht Club, and we are committed to working closely with all involved to stage this year’s championship with responsible protocols in place so we can provide this life-changing opportunity safely to these deserving players.

“Dubai Creek’s Championship course will enhance the tradition of world-class venues that have hosted the Asia-Pacific Amateur, and we look forward to showcasing the Asia-Pacific’s top-ranked amateurs in action.”

In the field in November will be China’s Yuxin Lin, who will be aiming to become the first three-time winner, having won the title in 2017 and 2019. The left-hander made the cut at the British Open at Royal St George’s Golf Club last month, where he finished T74.

“The Asia-Pacific Amateur is a wonderful tournament that has given me the opportunity to play in both the Masters and the Open, for which I’m very grateful,” said Lin, ranked 16th in the World Amateur Golf Ranking.

The champion receives an invitation to compete in the Masters Tournament and the British Open, while the runner-up earns a slot in the Final Qualifying round for the Open. 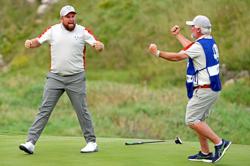 Golf-Europe face 'really tall task' versus United States in Ryder Cup finale
Golf-'Miracle at Medinah' will be on Europe's minds, says captain Harrington
Golf-Europe are not out of the Ryder Cup fight, says Lowry
Golf-DeChambeau to face Garcia in Sunday's singles as U.S. close on Ryder Cup win
Golf-U.S. players getting Ryder Cup celebrations started early
Golf-McIlroy back in European lineup for Ryder Cup fourballs
Out-of-form McIlroy dropped for foursomes
US leave Europe in dire straits
Woods’ text helps inspire US team to massive lead on first day
This is not for me, but for you