Chip away: Rory McIlroy practising his chip during a practice session at the Kasumigaseki Country Club yesterday. — AP

TOKYO: Rory McIlroy left it late to arrive for the golf tournament, but the four-time Major winner said he liked the Kasumigaseki Country Club course after his first look.

McIlroy only touched down from the US on Tuesday and will tee off at 10.25am (9.25am Malaysian time) today, representing Ireland in a mouth-watering grouping alongside newly-crowned British Open champion Collin Morikawa of the US and South Korea’s Im Sung-jae.

“It’s really just a fun golf course,” said McIlroy after his only chance to practice on the 7,447-yard par-71 layout, where a field of 60 will battle for the medals over four stroke play rounds.

“There’s plenty of opportunities out there for birdies, but then if you don’t hit the fairways the rough is pretty penal.”

McIlroy will be representing Ireland with 2019 British Open champion Shane Lowry, meaning they are the most decorated team in the event, with five Majors between them.

The British pair of Paul Casey and Tommy Fleetwood have been at the course since Saturday to prepare and acclimatise to the time zone shift, but McIlroy said he felt great despite his late arrival and long journey from Florida.

“I left Palm Beach yesterday morning at 6am (local time), got in here, landed around 11am yesterday,” McIlroy said.

“I got through the airport pretty quickly, which is nice. I got to the hotel, did a workout, met the guys for dinner and had a good night’s sleep.

“And then I’ve had a good day today of practice.

“It’s sort of nice it’s got that World Golf Championships feel where there’s a limited field and no cut,” added the world number 13.

“It’s just a nice feel, so I’m just going to come out tomorrow and play.”

The only downside, said McIlroy, is the lack of spectators at Tokyo 2020 because of coronavirus restrictions, especially the packed golf-mad home galleries that would have followed Japan’s Masters champion Hideki Matsuyama’s every move.

McIlroy witnessed it first-hand two years ago at the Zozo Championship, where he finished behind Matsuyama and winner Tiger Woods in third.

“When Hideki won the Masters, the first thing I thought of was how good the atmosphere is going to be at the Olympics,” said McIlroy.

“Unfortunately that’s not the case. So yeah, it’s tough. It’s not the Olympic experience that anyone dreams of having.

“But there’s three medals up for grabs and we’re all here trying to play for those.” — AFP 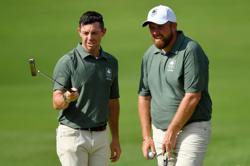