Gavin and Kelly eager to shine in Land of Rising Sun KUALA LUMPUR: Fresh-faced Gavin Green and Kelly Tan (pic) made their Olympics debut at the 2006 Rio de Janeiro edition but things did not go according to plan for both golfers.

But their Olympics dream didn’t vanish into thin air. At least, not for now.

Fast forward five years later, Gavin and Kelly are more ready than ever to tee off at the Tokyo Olympics. The golf events will be held from July 29-Aug 7 at Kasumigaseki Country Club, Saitama, about 65km from Tokyo.

Malaysian golf team manager for the Tokyo Olympics, Boo Chi Chai said both golfers have been working so hard for the past five years to qualify among the top 60 around the globe for the Olympics and are eagerly looking forward to shine in the Land of the Rising Sun.

However, Chi Chai is a tad bit wary of their recent form as both of them were not exactly top-notch performers of late.

“They might not be on their A-game currently as they have missed several cuts in their recent tournaments but I believe nothing is impossible in the Olympics,” said Chi Chai.

“If all goes well, I would not be surprised that both Gavin and Kelly could spark some fireworks.”

Gavin, who is currently playing in the European Tour, missed the cut at the Scottish Open last weekend while Kelly, who competes in the Ladies Professional Golf Association (LPGA) Tour, endured a similar fate at the Marathon LPGA Classic in Ohio, the United States.

Gavin, 27, qualified for the Games after he was ranked 55th out of 60 while Kelly was ranked 42nd out of 60 in the Olympic golf ranking.

Meanwhile, Chi Chai, who is also the Malaysian Golf Association vice-president, said they did not set any podium target for Gavin and Kelly so as not to put undue pressure on them.

“Both had indicated they will go all out and are in top fighting spirit to try and achieve the best for our country,” he added.

In the meantime, Chi Chai had advised both golfers not to get intimidated by other top players in the field and asked them to concentrate on playing for one shot, one hole and one round of 18 holes at a time. — Bernama 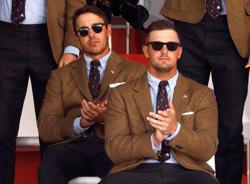