PETALING JAYA: Thanks to the odd rule by the Netherlands Olympic Committee, Asia is set to be strongly represented in the golf competition at the Tokyo Olympics next month.

China’s Wu Ashun and India’s Anirban Lahiri (pic) have been been included in the 60-man field for the Tokyo Games, taking up the slots made available by Dutch duo Joost Luiten and Wil Besseling.

Both Luiten and Besseling had qualified on merit by finishing inside the top 60 of the final men’s Olympic Ranking released on Tuesday, but had been forced to forgo their places because they are not ranked among the top 100 golfers in the world – a requirement set by the Netherlands Olympic

Luiten is currently ranked No. 178 while Besseling sits at No. 221.

“I would have loved to go to Tokyo, despite the restrictions that will apply due to Covid-19, ” Luiten, a six-time European Tour winner told golfNL.

“With what I consider as unnecessary extra demands, the Dutch Olympic committee have shown that they have little understanding about golf. It is common for golfers to win tournaments outside the top 100 in the world.”

As a result, their places were awarded to Ashun and Anirban by virtue of them being the first two alternates.

Anirban, the 2015 Malaysian Open champion tweeted: “Best surprise I have got in a while... can’t believe I will have the opportunity to once again represent the tricolor (India).”

It also has an impact on Malaysian Gavin Green’s final position, although he has qualified for the Tokyo Games. He is now 56th, two rungs from where he initially was.

With Ashun and Anirban being added into the list, the Asian contingent will now comprise 12 players in total from eight countries.

With US Masters champion Matsuyama alongside fellow PGA Tour stars Sung-jae and Si-woo leading the charge, hopes are high that the Asian contingent will mount a stronger challenge for the podium this time in the highly-competitive men’s competition.

At the Rio Olympics five years ago, Thailand’s Kiradech Aphibarnrat was the best Asian finisher at joint fifth. 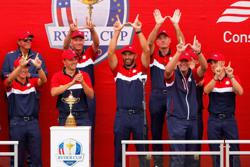