PETALING JAYA: Ervin Chang is saving his best for last in the the National Collegiate Athletic Association (NCAA) Division One men’s golf championship.

The 22-year-old has helped Liberty University qualify for the season-ending NCAA Nationals starting today at the Grayhawk Golf Club in Arizona, by virtue of the university being the top-five finishers from the Tallahassee Regional two weeks ago.

It will be their third appearance in the NCAA Nationals, and their second successive one having last featured in 2019. Last year’s edition was not held because of the Covid-19 pandemic.

Ervin’s debut in the NCAA Nationals has not been a memorable one. The team failed to make the top-15 cut for the latter stages, finishing 20th out of 30 teams.

Individually, he finished with a dismal 18-over par to be placed joint 119th out of 156 competitors.

Although Ervin did not set a specific target, he would definitely like to sign out his collegiate career in the best way he could.

“Honestly, the only goal is go out and play our best, ” said Ervin, who finished fourth at the 2019 Philippines SEA Games.

“As long as we do our best and focus in our game, the results will take care of themselves.”

Ervin is delighted that this time, he will be joined by another Malaysian in the NCAA Nationals as V. Khavish Varman had qualified with University of Alabama.

“It’s definitely special as we have two Malaysians playing in the tournament. Not a lot of players get the opportunity to make it to the NCAA Nationals.”

Ervin had graduated with a sports management degree in middle of last year but decided to defer his plan to turn professional due to the Covid-19 pandemic.

He was one of the many final year student-athletes being granted an extra year of eligibility by the NCAA because of the Covid-19 cancellations. 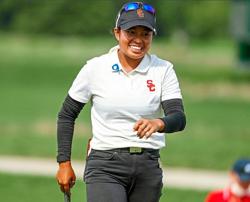