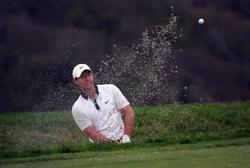 RORY McIlroy will start as a big favourite for many to win this week’s US PGA Championship on the Ocean Course at Kiawah Island Golf Resort if Dustin Johnson withdraws.

The 32-year-old from Northern Ireland might yet be joint favourite with Johnson, but the world number one is nursing a knee injury and may not figure at all in the season’s second Major championship. He pulled out of the AT&T Byron Nelson Championship which ends today and his absence would be a massive blow to the PGA Championship itself.

Still, McIlroy will command huge support if only because he will go into the PGA Championship with some good form. His triumph at the Wells Fargo Championship last week was his first PGA Tour win in

19 months. But it was always coming – really a matter when rather than if.

That he won again might yet make the difference between him clinching a fifth Major title or waiting for another since the 2014 PGA Championship.

McIlroy’s victory at the Quail Hollow Club in Charlotte was his third Wells Fargo crown and there’s not much to suggest he cannot now go on and win a third PGA Championship. The timing of that success could prove crucial in his attempt to join six others with five Majors to their credit, including Byron Nelson himself, Phil Mickelson and the great Seve Ballesteros, who passed away 10 years ago last week.

If McIlroy plays as well as he can and shifts his game into top gear, there might be no stopping him. But waiting to lay their hands on one of golf’s four Grand Slam titles will be more than a handful of players capable of doing just that. Among them will be defending champion Collin Morikawa who so famously drove his tee shot to within seven feet of the flag stick on the 16th hole in the final round last year, en route to his maiden Major.

Jon Rahm and Bryson DeChambeau are also expected to contend this week, as are Justin Thomas, Xander Schauffele and Brooks Koepka. Jordan Spieth

and Patrick Reed also have their names in the hat, but perhaps with a little less backing.

Rahm and DeChambeau in particular look like they are there to depart the barrier island southwest of Charleston in South Carolina with the huge Wanamaker Trophy in tow.

The 26-year-old Rahm, who has five PGA Tour wins, six on the European Tour and coming off a tie for fifth at the Masters last month, is due a Major and it would not surprise many if he comes good this week.

DeChambeau is the livewire of the PGA Tour and while he has twice disappointed at the Masters after much hype going into it, Kiawah Island might be where he nails down his second Major. He won the 2020 US Open in style.

Of the others tipped to be contending, come next Sunday, Thomas looks a good shout. He won the Players Championship ever so stylishly. With only one Major to his – the 2017 PGA Championship – his fans believe he has quite a few more in him.

Schauffele was contending at the Masters last month before he triple-bogeyed the 16th in the final round and slipped into a tie for third place.

He has had three top-10s in the last three Majors and five in the last eight. He is proven big-game player with the Tour Championship and WGC-HSBC Champions Tournament wins under his belt.

Will this be his week – his first Major title? Maybe. But then again, McIlroy might have something to say about that.