Gavin desperate for good results to realise his mission PETALING JAYA: The nation’s top golfer Gavin Green will be on a triple mission when he competes in four European Tour stops starting with the Canary Island Championships in Spain today.

The 27-year-old is desperate for strong finishes over the next five weeks that will not only help to put his season back on track, but also give him a chance to qualify for the US Open and a spot at the Tokyo Olympics.

Gavin has yet to find his footing this season after managing just two cuts in six outings, leaving him in 199th spot in the Race to Dubai standings.

This is in stark contrast to last year where he was 11th with the same number of tournaments and eventually ended the season in a career-best 52nd spot.

Gavin is also at risk of losing his Tour card as he needs to finish in the top 115 in the Race to Dubai rankings to retain his playing status.

He is currently on a six-week break from competition to fine-tune his game.

Thankfully, the time-out did not affect his position in the Olympic Golf Rankings.

Gavin, currently ranked 54th, must keep himself in the top 60 when the cut-off is made on June 28.

His other goal in the next one month is to qualify for the US Open at Torrey Pines Golf Course, California from June 17-20.

A total of 10 spots are up for grabs from three qualifying events in the European Tour.

Competitors with the highest accumulated points from these events but have not qualified through other avenues, will get the coveted spot. 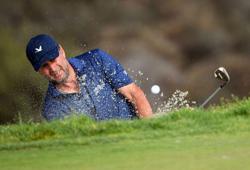