PETALING JAYA: A buoyed national amateur golfer Ervin Chang (pic) will make his second ambitious bid to qualify for the US Open via the two-stage qualifiers next month.

The 22-year-old Ervin has signed up for the one-day, 18-hole local qualifying event at the Federal Club in Glen Allen, Virginia, on May 6.

The Federal Club is one of the 109 sites across the US and Canada staging the local qualifiers from April 26-May 18, where a total of 8,680 hopefuls are vying to advance into the sectional qualifying rounds from May 24-June 7.

In his first attempt in 2019, Ervin passed the local qualifier with flying colours but found the sectional qualifiers, contested in a gruelling 36-hole format, too tough to handle.

“Two years ago, I won the local qualifier (after shooting 66 to top the 130-man contest at the Worthington Manor Golf Club in Maryland) but the sectional qualifying is truly a different ball game, ” said Ervin, who’s pursuing a Masters in Sports Management at the Liberty University in Virginia.

“Apart from the intensive 36-hole play, you also have to compete with mostly professionals.

“My game is shaping up nicely lately and I would like to give the US Open qualifying one more shot.

“I’m not thinking too far ahead yet, but my immediate goal is obviously to get through the local qualifying first.”

Ervin will not be short of confidence after having his morale boosted by being named the ASUN Conference Men’s Golf Scholar-Athlete of the Year.

The ASUN Conference, which has nine members, is one of the collegiate athletic conferences affiliated to the National Collegiate Athletic Association (NCAA) Division 1 in the US.

It was the second time he has received the award, which recognises student-athletes who excel both on the course and in the classroom, after 2019.

Besides boasting a CGPA of 3.80 (out of a possible 4.00), Ervin also excelled on the course where he posted a pair of top-10 finishes in six events during the 2021 season with a creditable 71.67 scoring average.

Just a fortnight ago, Ervin shot a career-low 63 in one of his three rounds en route to helping Liberty University emerge champions of the ASUN Conference. He also finished tied-seventh in that event.

“I feel blessed and honoured to be named ASUN Scholar-Athlete of the Year again this season. I am extremely grateful to all the people who have helped me get to where I am today, not just in terms of golf, but also in my academics as well as my life perspectives, ” said Ervin.

“Whatever you are doing, whether it’s studying or playing your sport, trust the progress and process.

“Receiving this award makes me realise that whatever I’m doing right now with my academic and sport life, it’s going in the right direction. Just going to keep doing what I am doing right now.”

Ervin has announced previously that he intends to turn professional at the end of 2021. 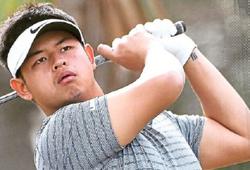 Golf-Junior Ryder Cup cancelled due to travel issues with European team
Olympics-Golf-India's Lahiri welcomes Barbasol boost ahead of Olympics
Golf-I did all I could, says Spieth, after Open near miss
Golf-Still not figured it out, but DeChambeau signs off in style
Golf-Ice-cool Morikawa wins blazing hot British Open
Golf-R&A, PGA support transgender golfer after reports of abuse at British Open
Golf-Rahm hangs tough to stay in contention
Golf-Macintyre makes hay in sun, but Royal St George's course bites back
Gavin and Kelly eager to shine in Land of Rising Sun
The Olympics – it’s an honour