PETALING JAYA: National top women golfer Kelly Tan failed in her bid to start strong in the LPGA season when she missed the cut in the KIA Classic in Carlsbad.

A seven-over 79 in the opening round on Thursday dashed Kelly’s hopes of progressing to the weekend play at the Aviara Golf Club.

She improved with an impressive one-under 71 on Friday but could not salvage a spot.

Kelly, returning to the event for the first time in four years, shared the 96th spot with her two-day total of six-over 150.

It is the start of a hectic four-week campaign with the 27-year-old having signed up for the ANA Inspiration – the first Major of the season next week, the Lotte Championship (April 14-17) and the Hugel-Air Premia LA Open (April 22-25).

Kelly impressed on her first return to the flagship tour in three years when she finished 54th on the Official Money List with season earnings of US$223,397 (RM922,000).

Despite competing in just 15 events in the pandemic-shortened season, Kelly finished inside the top 30 on seven occasions and missed just two cuts.

Her most notable achievement was finishing tied-13th at the Women’s PGA Championship, which marked the best-ever Major finish by a Malaysian – man or woman. 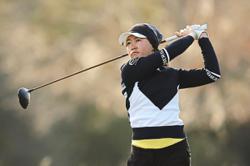