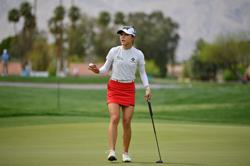 The 27-year-old has also signed up for the ANA Inspiration, the first Major of the season from April 1-4, Lotte Championship (April 14-17) and Hugel-Air Premia LA Open (April 22-25).

Except for the Lotte Championship in Hawaii, the rest are taking place in California.

Kelly will first aim for a confidence-boosting start at the US$1.8mil (RM7.42mil) Kia Classic at the Aviara Golf Club in Carlsbad – where she’s returning for the first time in four years.

The world No. 145 will be out to snap a string of poor results there having missed the cut in her last three appearances from 2015 to 2017.

The only time Kelly made the weekend was during her debut in 2014, but she could only muster a tied-67th finish.

A decent outing will certainly set it up nicely for Kelly ahead of a trip to Mission Hills Country Club in Rancho Mirage for the ANA Inspiration meet.

A strong start early in the season would be crucial for Kelly, who’s seeking to build on a stellar campaign last year.

The Batu Pahat-born Kelly impressed on her first return to the flagship tour in three years. Prior to that, she spent the last 2018 and 2019 seasons playing on the second-tier Symetra Tour.

Kelly only regained her playing status through the LPGA Qualifying Series in December 2019.

And what a 2020 season it had turned out to be for Kelly as she has outdone all her previous best feats in 2016, despite having competed in just 15 events in the pandemic-shortened season.

Kelly finished inside the top 30 on seven occasions and missed just two cuts.

Her most notable achievement was finishing tied-13th at the Women’s PGA Championship, which marked the best-ever Major finish by a Malaysian – man or woman.

She also came in a creditable 37th in the season-long Race to CME Globe, surpassing her previous highest position of 83rd in 2016.