(Reuters) - Lee Westwood and Graeme McDowell have called for recreational golf to resume in England amid a national COVID-19 lockdown by backing an online petition that has received nearly 100,000 signatures.

Prime Minister Boris Johnson announced the lockdown on Monday due to surging infections caused by a more contagious variant of the novel coronavirus.

As a result, golf clubs, indoor and outdoor facilities and driving ranges were required to close, prompting England Golf CEO Jeremy Tomlinson to say the government had missed the opportunity to look after amateur players.

Englishman Westwood, who was crowned Europe's number one golfer for the third time in his career last month, tweeted a link to the petition on Tuesday which has received 95,437 signatures.

"I think this is something worth supporting in the UK. With correct safety measures, golf is a sport which can easily function in these tough times. Great for exercise and general well-being," world number 83 McDowell said on Twitter in response.

Tomlinson said in a statement the government had to consider golf as part of the solution and not a part of the problem. It was similar to other open-air recreations that are free of government restrictions, he said.

"If you reopened courses to allow the community of 2 million golfers in England to have that as a safe option for exercise ... that could be a huge positive in the fight against the physical and mental health issues posed by lockdown," Tomlinson said. 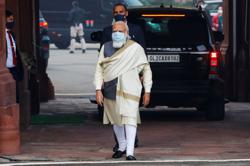