Apart from witnessing some of the training programme, His Royal Highness also spent a couple of hours with the team and treated them to lunch.

Team manager, Tengku Muzzammil Tengku Makram said that the presence of His Royal Highness Tunku Laksamana Kedah will definitely motivate the players to give their best in the upcoming Sukma, planned to be held in March in Johor.

He also thanked Tropicana’s executive director Herman Tan and general manager Eric Ooi for their “kind assistance” to the team.

He added that with the help of MSN Kedah and the generous support of the sponsors, the squad hopes to win at least one gold medal as a token of their gratitude.

The Kedah team management also has plans for the squad to undergo a training camp at the National Golf Academy at UUM and play several “Tour” courses in Malaysia, particularly in Johor. There are also motivational and sports science sessions on the drawing board.

Leaving no stone unturned in their pursuit for excellence, Tengku Muzzammil said they hoped that golf in Kedah will continue to develop and that the state will eventually become a powerhouse in Malaysia, and then in Asia. 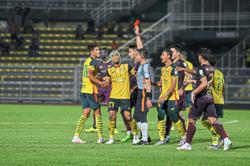