The June 19-22 tournament is to be held in Cork, the country's most southerly county, this year for the first time since 2002.

"I think it is great news the Irish Open will be played at Fota Island," twice major winner McIlroy said in a news release on Monday.

"The country's national open should be moved around to give everyone an opportunity to see the event and it also gives us the chance to show the world just how many amazing courses there are in Ireland," added the Northern Irishman.

McIlroy's views were endorsed by McGinley who will lead Europe's Ryder Cup defence against United States in Scotland in September.

"I'm delighted Fota Island is going to host the Irish Open," said the Irishman. "The players will love the course and everyone involved with the tournament will enjoy the craic on offer in Cork."

The Fota Island Resort, recently purchased by Chinese investors The Kang Group, will also be an Irish Open sponsor. 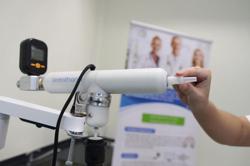