DOHA (Reuters) - Lionel Messi's hopes of winning an elusive World Cup will come up against the tactical scheming of veteran coach Louis van Gaal as Argentina face the Netherlands in Friday’s quarter-final at Lusail.

Messi, 35, once again carries his nation's hopes on his shoulders as he looks to crown an extraordinary career that includes seven Ballon d'Or awards and multiple club titles, but only one Copa America to show for his efforts with Argentina.

Messi can expect little in the way of sympathy from the 71-year-old Van Gaal, who is determined to give the Dutch their first World Cup title after runners-up finishes in 1974, 1978 and 2010.

The coach’s planning will largely focus on containing Messi and catching Argentina on the break, as Van Gaal thumbs his nose at his critics by playing a brand of football at odds with the usual attacking Dutch approach.

The tactical plan is key to his side’s hopes of winning on Friday as the Dutch look to take revenge for their semi-final defeat in 2014 when Argentina beat them in a shootout.

“We can surprise teams with our plan. We were also the better team then and Messi didn't see much of the ball,” the coach told reporters this week.

He can also point to a run of form that has seen the Dutch go 19 games without defeat since he returned to the hot seat for a third spell 15 months ago.

Messi spoke briefly about the Dutch threat after Argentina's 2-1 win over Australia in the round of 16, where he marked his 1,000th career appearance by scoring and being named Man of the Match.

“Another difficult one is coming,” he said.

Messi can expect vocal support from Argentine fans in Qatar, who are set to vastly outnumber their orange-clad Dutch counterparts.

On the losing side against Germany in the 2014 final, where Argentina failed to add to World Cup triumphs in 1978 and 1986, Messi was grateful for the support.

“These are incredible moments. We want to thank all the people who are here. The whole of Argentina would love to be here,” he said.

Argentina coach Lionel Scaloni is still sweating on the fitness of Angel di Maria, who missed the Australia game due to a left thigh injury but returned to training on Tuesday. 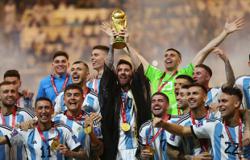