AL WAKKRAH, Qatar (Reuters) - For a team that beat Germany and Spain in the group stages, Japan's three horrendous misses in Monday's penalty shootout defeat by Croatia underline how the Samurai Blue still lack the nerve to make a deep World Cup run.

Japan oozed confidence against 2018 runners-up Croatia, relentless in attack and steadfast in defence in a tense match. But they crumbled when it mattered most, failing in their attempt to reach the quarter-finals for the fourth time in two decades.

It was another painful Arabian Gulf experience for Japan, who will see Qatar as their curse having come within seconds of reaching their first World Cup 28 years ago, only to concede a stoppage-time equaliser that sent South Korea through instead.

That moment is known in Japan as "the agony of Doha" and remains one of the country's biggest soccer setbacks.

It also demonstrates how after seven successive World Cups and four appearances in the last 16, the giants of Asian football still lack what it takes to go the distance.

In 2002 as co-hosts, they lost 1-0 to Turkey in the last 16 on home soil and eight years later in South Africa they lost out on penalties to Paraguay.

Fast forward eight years to the World Cup in Russia, Japan looked almost certain to have finally broke their duck, taking a two-goal lead against Belgium and holding out until 69 minutes, before conceding three late goals to miss the quarter-finals yet again.

On Monday in Al Wakrah, Japan looked like a team worthy of a place in the quarter-finals, hitting Croatia from the start with resolute defending and incisive runs down the flanks that created myriad chances as they went ahead before halftime and battled hard to get back ahead with the score levelled at 1-1.

Coach Hajime Moriyasu was seen rallying his players in a huddles before the extra time and then the penalty shootout, but the pep talks did little.

The players' body language showed reluctance and their execution was woeful.

Takumi Minamino was first to miss before Kaoru Mitoma followed with an equally tame spot kick saved easily by the keeper.

Takuma Asano found the net but Maya Yoshida's poor miss gave Croatia the chance to seal the place in the last eight, an opportunity Mario Pasalic took coolly when he found the net, sending keeper Shuichi Gonda the wrong way.

Moriyasu was cheered wildly by Japanese fans as he greeted them after the defeat. Despite missing their goal of a last eight finish, he said his team showed a new era of Japanese soccer had begun.

"We couldn't break the barrier towards the final eight, but the players were able to show a new generation of Japanese soccer," he said.

"We beat Germany and Spain - World Cup champions. We should be confident in our ability and if we aim not just to catch up to but to surpass, I think there will be a different future ahead for Japanese soccer." 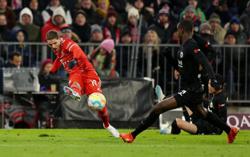