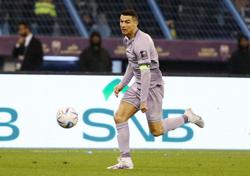 (Reuters) - The 2022 FIFA World Cup in Qatar has entered the knockout phase, and one of the top honours players compete for is the Golden Boot, awarded to the player with the most goals in the tournament.

The number of assists by a player is considered in the case of a tie for goals scored. If players are tied on both counts, the winner is decided by who played the fewest minutes.

England captain Harry Kane bagged the prize at the 2018 World Cup in Russia, where he scored six goals and led his team to the semi-finals. Below is an overview of contenders in the race for top scorer at the 2022 World Cup:

* The Atletico Madrid marksman scored in all three of Spain's Group E games, including one off the bench against 2014 champions Germany.

* Morata, who was edged out of the starting lineup by Marco Asensio in his side's first two World Cup games, set up Spain's fifth goal in their 7-0 thrashing of Costa Rica before getting off the mark himself to round off a one-sided opener.

* He put Luis Enrique's team ahead in their final group game but the 2010 champions were beaten as Japan staged their second stunning turnaround of the tournament to surge into the last 16 in top spot.

* France's talisman failed to find the net as Tunisia recorded a famous upset over Les Bleus in their final Group D match.

* The 23-year-old scored against Australia in his side's opener and bagged a second-half double against Denmark as France booked their knockout spot.

* He could add to that as his country face off against Poland in the last 16. Poland's all-time top scorer Robert Lewandowski will also be looking to better his count of just one so far.

* The England striker has enjoyed a dream start to his World Cup campaign in Qatar.

* Rashford's place in the squad was uncertain a few months ago due to form and fitness, but the Manchester United forward has moved up the Golden Boot standings after he netted twice in England's rout of a Gareth Bale-led Wales side.

* The Dutch forward has managed to find the net regularly in Qatar so far, as the Netherlands progressed to the last 16 after finishing top of Group A.

* However, Gakpo was unable to add to his tally in the Netherlands' 3-1 win over the United States in the last 16.

* The 23-year-old Gakpo has been influential in his club PSV Eindhoven's run to the Europa League knockout stages and has been the subject of transfer speculation with top European clubs said to be vying for his signature when next summer's transfer window opens.

* The Argentina great is playing in what he has said is probably his last World Cup. The 35-year-old opened his account by burying a spot kick in a shock Group C loss to Saudi Arabia, before scoring and assisting Enzo Fernandez in an emotionally charged win over Mexico.

* Messi also scored in Argentina's 2-1 win over Australia in the last 16, putting his side ahead after 35 minutes with a coolly taken low strike for his 94th international goal.

* The seven-time Ballon d'Or winner has enjoyed a trophy-laden career at club level, and his fans around the world are hoping he can finally help deliver a World Cup for his country this time around.

* Messi's rival Cristiano Ronaldo of Portugal will also be eyeing the Golden Boot after becoming the first player to score in five World Cups when he netted against Ghana in their Group H opener.

* Portugal's run in the World Cup in Qatar has been clouded somewhat by the controversy surrounding Cristiano Ronaldo and his acrimonious departure from Manchester United.

* But his erstwhile club team mate 28-year-old Bruno Fernandes has stepped out of Ronaldo's shadow by scoring twice against Uruguay after setting up two goals in Portugal's 3-2 win against Ghana.

* Ecuador's all-time top scorer, nicknamed "Superman" at home, scored the first two goals of the World Cup in their opening match against hosts Qatar at the Al Bayt stadium as the South Americans ran out winners.

* Valencia added a third in a deserved 1-1 draw against the Netherlands, but will not be able to improve his tally as Ecuador failed to reach the knockout stage after losing 2-1 to Senegal to finish third in Group A. 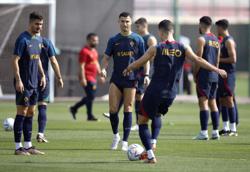